Sorry, I am so late on this blog I been busy AF! After I got back from France I went to Chicago, then I got busy with work and now back to school, and then more stuff happened in my life. Overall my life has been a hot mess. But I’ll save that for later. First, let’s talk about France!

Now let me explain why I went France. I went with Our Lady of the Lake University. Yes, that is not where I go to school. My best friend’s mother works there and was able to get us approved to go. This trip was actually a pilgrimage. We followed the footsteps of the founder of the Sisters of the Congregation of Divine Providence, a religious order that began in the 18th century Lorraine, France, by Blessed John Martin Moye. This trip had a lot of meaning to me. I went to the high school that the Sisters founded in San Antonio Texas. My mother went to the same high school and Our Lady of the Lake University. Actually, a lot of people in my family either went to the high school or university. SO I have a connection with them. I am so blessed to have been able to go on this trip.

I left to France from the Houston Airport around like midday on July 13th. This was my first time flying overseas. I was scared for sure but excited. My friend Karli was going with me and sitting with me so I knew I would have someone to talk to and sleep on. The flight went by fast for sure but I did sleep most of it so guess that might be why. We landed in Paris then hopped on a plane to Toulouse then drove to Lourdes, France. Which is where the adventure began. 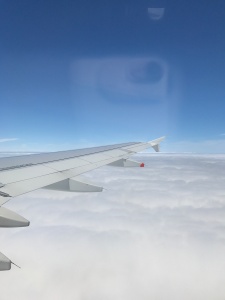 I loved this town so much! I honestly would have just stayed there if I could. It was just a wholesome place with great people and history. Our hotel was in such a great location and we had a great view of the river and the castle that was in the city. The people in the city were so nice and welcoming. Walking on the street you would hear so many different languages and meet people from different parts of the world. In Lourdes, there is a grotto where the Virgin Mary appeared to a little girl named Bernadette. The grotto has a natural spring that water is said to have healing powers. After years of confirming this sighting, the town builds a church where the grotto is. The Basilica of Our Lady of the Rosary is beautiful, just jaw-dropping to see this basilica that has been standing for hundreds of years. Every night there is also a candlelight procession where the Rosary is prayed in every single language. The experience of being part of that was so spiritual and just eye-opening. As I walked around this town, I felt so safe and full of joy. Listening to people stories of why they came to this city, trying the food, going out and seeing the nightlife. It was just the best. It was crazy to think how my friend and I were walking on the same streets that Saint Bernadette was walking on to get to the grotto to see Our Lady. I spent 3 days/2 nights in Lourdes till it was time to make a cross-country road trip to Northern France!

Below are some pictures from Lourdes! Click on the image to enlarge as they say. 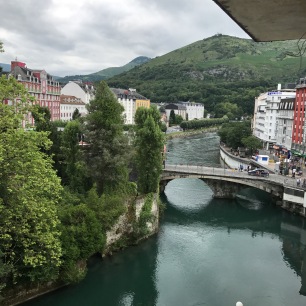 This was a very long bus ride but I was able to see all of France by doing this! We left early on the 16th to travel to a little village called St. Jean de Bassel. Located in St. Jean de Bassel is the original Mother House of Sisters of the Congregation of Divine Providence. This is where the group stayed for the next 5 days/4 nights. This was the cutest little village, the sisters were so excited to see us all the way from Texas. The Mother House was adorable and their hospitality just made me feel so welcomed. At night you could see all the stars, hear all the natural sounds of the countryside. Exploring the grounds and the house itself was so much fun! The sisters grow their own fruits, vegetables, and flowers which were just amazing since you don’t see that a lot in America.

Below are some pictures of the Mother House! Click on the image to enlarge as they say. 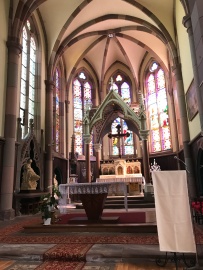 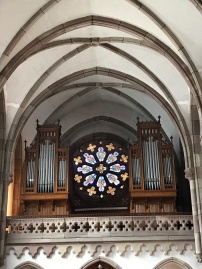 Since we were so close to Germany, we had to go across the border! I was about to eat schnitzel and drink beer in Deutschland! Germany is honestly so beautiful and I am dying to go back! Next day we went to Metz to see the most beautiful cathedral that’s almost 500 years old.  I got to visit the capital of the European Union, Strasbourg, and go on a river cruise of the city. Honestly everywhere I went to was beautiful and jaw-dropping.

One very humbling part of the trip was visiting the largest number of any American World War II cemetery in Europe. We traveled to Saint Avold to visit this cemetery that brought me to tears.  I hear three stories of 3 different soldiers. One who got his purple heart years after his death because he was black. One who wrote one last letter home days before he sacrificed himself for his fellow soldiers. And one unnamed soldier only knew by God. I have never felt more grateful for all those who fought for the freedom I have. I also never felt more grateful for those who fought for me knowing they were not going to make it.

Below is a slideshow from the cities I got to go to! Click on the image to enlarge as they say.

On July 22nd, we woke early to drive from St. Jean de Bassel to Paris! Our group was lucky enough to be in Paris on the last days of the Tour de France. And let me say being in Paris was one of my favorite parts. I was in awe with the food, the culture, and history of the city. Seeing the Norte Dame was a dream come true. The thought of just walking on the same streets that others have walked on for centuries is just amazing!  We of got to visit the Eiffel Tower, and we took a river cruise of the city. This first day in Paris was very tourist of course. I mean we were in Paris.

The second day very moving. We got to go the Chapel of Our Lady of the Miraculous Medal and have mass in French. After mass we all got a Miraculous Medal to take home with us. Of course, though I bought some more for family back home. Hearing mass in French made me feel amazed. Even though the language was different I still hear the Word of God. I sang and spoke when I was asked to. This mass will stay so close to my heart because in that moment I felt close to God plus I was surrounded by others who wanted to let God in. After mass, we got to visit Montmartre which is a large hill with the  Basilica of the Sacré-Cœur on top. This top of this hill and behind the Basilic there is a lively market filled with artists and restaurants and shops.  This area was one of many favorite places in France. The art took my breath away. The food made me want to just eat everything. And the shops were so cute. The Basilica moved me so much! The history behind why it was built was fascinating. The fact that someone would build such a beautiful giant basilica for what they believed in was just astonishing.  I felt so close to God at that moment, to be honest. The art made me speechless. I thought of how much I wanted to just stay there and pray and one day bring my family to see this. My last night in France made me never want to leave.

Below is a slideshow of Paris! Click to enlarge.

Of course, though I had to come back to Texas. We left on July 24th to Houston Texas! The flight was quick but gave me time to reflect. This trip really did change me. I feel more certain about my life even though I am unsure about what will happen. I know that sounds like nonsense but it’s true. As they say que sera, sera. I never had any plans to go to France one day till this opportunity just appears on my footsteps. You never know what will happen and when it does just say yes. Also, this trip made me feel closer to God. I never been that relious. I went to Catholic school, I have done all the sacraments but in this trip, I grew deeper in my faith.  Hearing stories from people in Lourdes on why they came to this holy site, being part of mass with people from different parts of the world, and just being able to see the beauty that God made, was life-changing. After this trip, I feel more humble, understanding, and well-rounded. I can’t wait to travel more in the future. My next trip I hope will be Mexico City with my grandma.

But for now, I am here in Texas going to school and enjoying everything life as to offer. I know this blog post is late and long but I hope y’all loved it kittens!